Why Motivating Your Team Isn’t Working: 3 Ways to Use Incentives and Accountability without Crushing Souls

“If you want to build a ship, don’t drum up people to collect wood and don’t assign them tasks and work, but rather teach them to long for the endless immensity of the sea.” – Antoine de Saint-Exupery

Incentives are a tricky thing.

To some extent, all business functions as quid pro quo; I do something for you, and in exchange, you give me something, usually money. This is the primary rule of the game, and something we all accept as the foundation of the free market.

However, one of our core psychological needs is to feel like we have a say in our fate. And perversely, well-intentioned attempts to motivate behavior can leave people feeling controlled. This means bonus structures often kill the intrinsic motivation to do a given task on the merits of its own reward.

Herein lies one of the great challenges faced by all leaders and all management structures across business. How do set up payment and reward systems that don’t make it all about the money? How do we set up clear standards that don’t leave your team feeling oppressed? In other words, how do we create the conditions whereby which people motivate themselves?

1) Frame Rewards As Recognition and Appreciation, NOT As Carrots

Back in my personal training days, the big box gym where I worked offered a “bonus” structure. After a certain number of sessions trained in a payroll period, trainers received an extra few dollars above their “base rate.”

Here’s the problem; for virtually all trainers, this “bonus rate” was quickly internalized as “what we expected to make.” Now you may say this is on us. And it’s true, in theory we could have done our best to remember we weren’t entitled to the bonus rate. But since the bonus rate was given out for a reasonable target of sessions, successful trainers quickly became used to that rate.

In the event we had some clients on vacation or feeling sick, we were now left in the morally dubious position of being incentivized to get people to train more to hit our bonus minimum. And if we didn’t, it felt like management was penalizing us and lowering our pay-rates.

So how best to solve this puzzle?

The good news is that the answer lies largely in how we frame it. Ongoing structures like the ones I described above are perhaps most perilous. They may in fact lead to more short-term profit for the company. But they also left the trainers feeling like we were being punished when we didn’t hit our minimums.

The better approach would be finding a way to make the bonuses feel like a… well… a “bonus.” Bonuses are extra pay or rewards in recognition of a job well done, not a carrot dangled by our corporate overlords to hit their target numbers.

So how exactly do we go about doing that?

2) Look For Opportunities to Offer Your Team Choice

The solution to the above dilemma happens to be tied into another general best practice. One of the best ways to empower your team is by offering them choice and giving them some say.

Whenever possible, invite them into the decision making process. Not sure how to incentivize your team without feeling like you’re attempting to control them? Let them propose the structure and take part in creating the system.

Want some guidance on how to use this in setting up on-going development systems for your team? Check out this article HERE.

In the challenge above, management could have invited trainers to be a part of the process of deciding on the thresholds for bonuses. They could also, to some extent, have had a say in deciding on what exactly is the bonus itself. Perhaps a creative non-pay related bonus could have been considered.

Importantly, you can apply the same strategy in creating accountability standards. At Mark Fisher Fitness, we have a system called “Creative Consequences” we’ve adapted from our heroes at Zingerman’s Deli. Whenever someone misses an internal deadline, they’re assigned a creative consequence of their choosing. Examples here include donating some money to our non-profit the Uprising, donating money to our summer Party Bus fund, cleaning out the merch fridge, cleaning off the iPads we use in semi-private training, etc.

This system has been incredibly helpful for the team to feel that there are meaningful consequences for missing our internal standards. It also makes peer-to-peer accountability expectations clearer for all parties. Obviously, this doesn’t replace more formal disciplinary action when required. But it allows the team to feel empowered to address the small violations that can erode trust over time.

3) Acknowledge the Inherent Challenges In Structuring Rewards and Creating Standards

Finally, one of the best ways to handle this conflict is my favorite management swiss-knife; total honesty and candor.

Humans are reasonable. People know it’s hard to balance the creation of standards and expectations without snuffing out freedom. We may want to be able to sleep in and work whenever and wherever we want. Anyone that works at a business’s in-person reception desk understands why that’s simply not an option.

If you call out the inherent motivational pitfalls in advance, you’ll be displaying your respect for your team as autonomous humans. When creating a bonus structure, let them know that research indicates bonuses can sometimes kill intrinsic motivation. With this in mind, ask them to help in creating a system that feels best to them.

Communicate the reasons why your business needs certain goals, standards, and/or constraints. Genuinely empathize with their position if the needs of the business present a pain in the ass. Acknowledge the last thing you want is for them to feel like they’re being boxed in and robbed of freedom.

Lastly, there’s one other implicit point of freedom that can be explored in extreme scenarios: the freedom another job that’s a better fit.

Not every job is the right fit for a given individual’s need for flexibility and autonomy. Furthermore, this can change over time as a role changes or an individual’s personal preferences change. On the one hand, it’s wildly inappropriate (and immature) to respond to each and every complaint about a standard with an invitation to go look for another job. But on the other hand, sometimes this is exactly the solution that needs to be explored to find the best outcome for all parties. And when approached with empathy and positive regard, this can be done in a way that’s autonomy-supportive and kind.

By treating people like actual human beings (and not your “assets”) and genuinely giving a shit about their well-being, you’ll create the conditions for them to motivate themselves.

A final note; there is a difference between autonomy-supportive and permissive.

At the end of the day, for work communities to thrive, we need to be able to count on each other to meet certain standards of behavior. It’s the job of the leader to establish, clarify, and ensure the standards are consistently met.

Want to learn more about how to do that? Check out this article on “Constant, Gentle, Pressure” HERE.

While it’s always important to show respect for people as human beings with their own dreams, hopes, fears, and desires, it’s equally important to consistently honor your commitments to the organization at large by holding people accountable.

If someone is constantly running late, you’re not being autonomy-supportive by allowing the behavior to continue. You’re hurting everyone else who are being inconvenienced by this lack of dependability. And nothing infuriates high performers more than feeling like someone is getting a free ride and consistently missing the mark.

Once the standards are clear, it’s vitally important to let people experience the natural consequences of their behaviors.

Want some help communicating through the missed expectation minefield? Check out this article HERE with some takeaways from my favorite management books.

None of this is easy of course. People are complicated. Any intellectually honest leader will know there are times when the desire to seize control will be bubble up in your chest during a challenging situation.

But there is a better way. Embracing the points above will lead to better relationships, better work outcomes, and a more successful business.

This article was largely inspired by “self-determination theory,” one of the leading theories of human motivation. Nerdy nerds looking for further reading and more insight into the research behind these protocols should check out the following books: 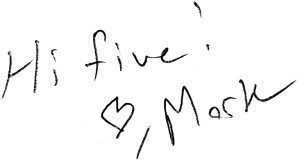 Keeping it brief today, but wanted to be sure you saw my newest project. That’s right… MOAR MF CONTENT! My pals John Franklin and Mateo Lopez from Kilo have joined forces with yours truly to start a new kind of fitness industry YouTube show: Gym World Worldwide! We...

But Monday was my birthday.  I’ve cheated death.  Yet again!! Between my birthday and the time management workshop I did a few weeks back, I’ve got time on the brain. To that end, I wanted to share a resource with you that can help you use your time more effectively....

I’ve completed the book! It’s done! Huzzah! CLAIM YOUR COPY Now as a loyal subscriber, here’s a warning: this book is a compilation of BFU emails written over a two year period. This means if you luuuurve this here weekly email, you may have already read all these...

First things first, it’s not too late to grab a spot for my time management workshop. I’ll be making the magic this coming Saturday, Jan 7th from 10am to 5pm est virtually on Zoom. Although live attendance is strongly encouraged, all registrants will get the recording...

As we come to the end of the year, I always reflect on which books had the biggest impact on me over the previous twelve months. So with that in mind, here’s my final “best of” email for 2022, where I share my favorite books of the year. First off, I can’t honestly...

I hope you’re getting some extra downtime with your family as 2022 winds down. Since I know you may have a bit more free time on your hands over the holidays, I wanted to share some of our most popular BFU podcasts of 2022 (as determined by downloads). For your...