How to Completely Change Your Relationship to Feedback 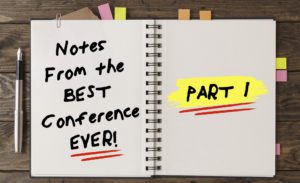 I am an education junkie.

Show me a workshop, book or conference that could help me expand my thinking or help me make a better impact on the world and I am all in.

Recently I went to the best conference I’ve attended to date — the 2018 WorkHuman Conference, created by Globoforce. It was epic!

I liked everything about it. The speakers were awesome — people like Brene Brown (Swoon!), David Rock, Tarana Burke, and Simon Sinek. The content was on point. The conference was well organized.

For context, Globoforce is a software company that focuses on employee recognition systems. So, the conference was geared toward HR professionals with themes like diversity and inclusion, humanizing your brand, and leaders as cultural facilitators.

Fair warning, if all that sounds like a bunch of BS, gobbledygook you should just skip this series of articles because I’m going to go neck deep into some real HR-oriented team culture shit.

I have pages of actionable notes from the 3-day conference, but today I’m going to share just one of my favorite ideas from the conference.

It’s simply just too much magic for one article.

Let’s dive into the first of my favorite ideas!

Stop giving feedback and start asking for it.

Presentation: The Neuroscience of Feedback: How to Radically Transform the Quality and Quantity of Feedback

This idea is so simple but so profound.

David makes the case that performance management is feedback management. His research asks the question what happens in the brain when feedback works?

There are three things about feedback that we have wrong.

1. We think we hate feedback. We don’t. We value feedback but hate it when it’s unsolicited.

2. We think that feedback is about pointing out errors – the things that are wrong. The reality is that that best feedback is not about the actions we should decrease. The best feedback, the kind our brains crave, is what we should be doing more of.

3. We think that feedback has to be giver-driven. Because it often feels good to be the giver rather than the receiver, we have a bias toward wanting to give.

His solution is simple but counterintuitive.

Stop giving feedback and start asking for it.

Here’s why this is so effective. When you ask for feedback:

David also made the brilliant point that if you aren’t asking for feedback then you’re only ever getting it from the people who are the most frustrated with you. It’s no wonder we hate feedback so much.

He continued, “Feeling assessed by another human is the gold standard for making the brain go crazy!”

If you love this idea as much as I do, here are some tips for getting started:

Fun fact: In David’s research, less than 20% of employees get weekly feedback.

Here’s the thing my friend, I’ve already started trying this for myself and it has been remarkable.

Since I’ve returned from the conference I’ve asked several people “When it comes to X, what can I be doing more of?”

It hasn’t been frightening or scary. In fact, it’s been exhilarating and I’ve learned so much just by asking that simple question to people who would not normally be giving me feedback.

Give it a try and let me know how it goes in the comments below.